What is a COG?

Connecticut is divided into planning regions, which are first-level political subdivisions of the state. Each planning region is served by a regional Council of Governments (COG) that brings together the Chief Elected Officials (CEOs, or mayors and first selectmen) of the municipalities in the region to discuss matters of mutual interest and to address shared problems. These persons comprise the COG’s governing board and collectively determine the activities the COG will cay out. (When the voters in a municipality elect a mayor or first selectman, they are also electing that person to represent them on the COG.)

Deliberations of the COG are conducted at regular, public meetings. A schedule of and materials for WestCOG’s meetings can be found here. Persons wishing to communicate with the COG are invited to do so through their CEO and/or during comment periods at COG meetings.

A map of Connecticut’s regions, with links to their respective COGs, is below. 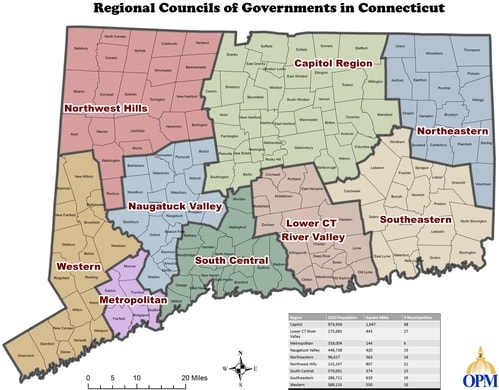 No opportunities listed at this time.

WestCOG is not seeking candidates at this time.

The Western Connecticut Council of Governments (WestCOG) consists of 18 member towns. It is dedicated to preserving and improving the quality of life and economic vitality in western Connecticut. WestCOG works on topical areas such as transportation, housing, community development, environment and open space while providing technical and planning assistance and expertise. WestCOG provides a forum for municipalities to communicate and collaborate in addressing inter-municipal issues and needs. 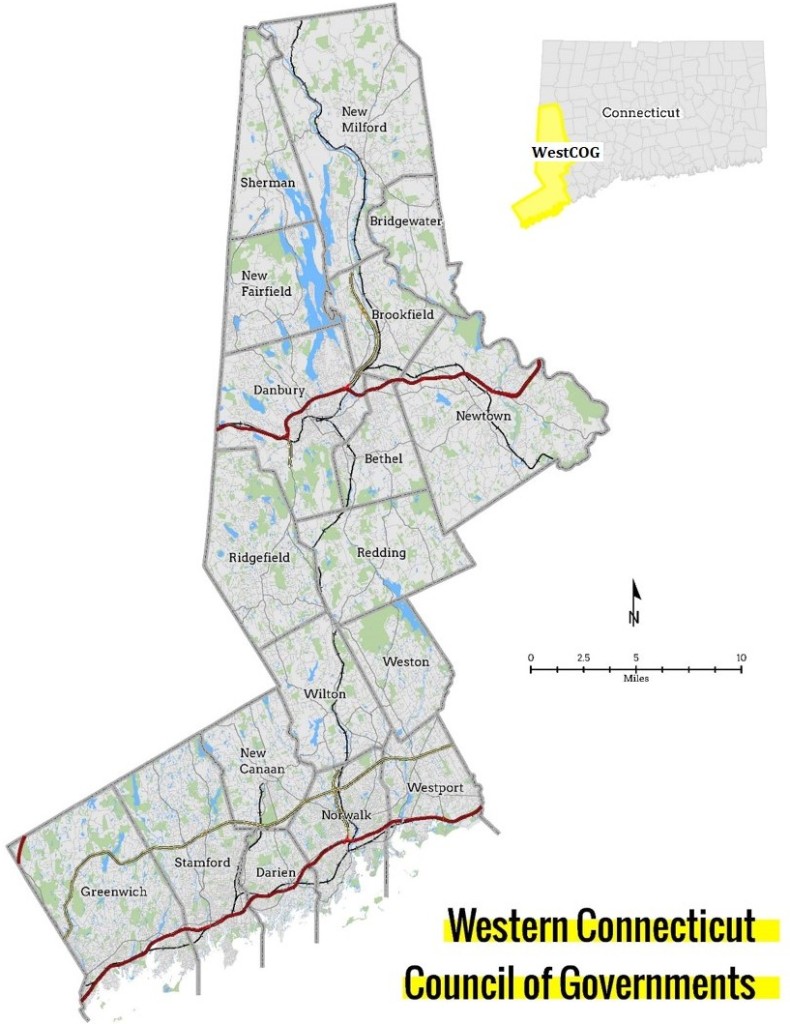 WestCOG is governed by a council composed of mayors and first selectmen. Each WestCOG member municipality is entitled to one representative and one vote on the council.

WestCOG receives most of its funding from the federal government in support of its MPO transportation planning functions. This federal funding is supplemented by contributions from state and local sources. WestCOG also receives funding from state and local sources to perform its coordination and regional planning functions. Additional grants fund special projects supported by the region’s mayors and first selectmen.

Francis directs WestCOG’s staff and represents the region to partners, including state and federal agencies. Prior to joining WestCOG, he served as Deputy Director at the Central Connecticut Regional Planning Agency (CCRPA). His work has been recognized with CCAPA’s Innovative Plan of the Year in 2013, and NADO’s Innovation Award in 2014, and CACT’s Friend of Public Transportation in 2019. Francis is also active in the development of major regional transportation initiatives and serves on the Connecticut Bicycle and Pedestrian Advisory Board and the Association of Metropolitan Planning Organization’s Technical Committee. Francis holds an M.A. in Environmental Management from the Free University of Berlin (Germany) in addition to a B.A. from Princeton University and an M.A. in Geography from the University of Connecticut.

Patty serves as WestCOG’s Finance Director and is responsible for financial reporting, grant tracking and compliance, audit preparation, record keeping, and financial analysis. Patty has a degree in business along with over 25 years of experience in bookkeeping, office management, grant tracking, purchasing, and HR responsibilities.

Prior to joining WestCOG, Vicky worked as a Financial Analyst for Kimberly Clark Corporation for 9 years. She received a B.S in Accounting and Management Information Systems from the University of Wisconsin Oshkosh. Vicky’s primary responsibilities include organizing office operations, correspondence, and meeting coordination and preparation.

Kristin assists with transportation planning services at WestCOG, including management of corridor studies and development of the region’s Long-Range Transportation Plan. Prior to joining WestCOG, she worked in transportation planning at AECOM and the Central Connecticut Regional Planning Agency assisting with road safety audits, transit and rail studies, and data analysis. Kristin graduated with a B.A. in Geography with a specialization in Planning from Central Connecticut State University.

Kevin is a civil engineer with over 30 years of experience in the transportation field. He was previously employed with the Connecticut DOT, Federal Highway Administration, the Pennsylvania State University and in consulting. He is a registered Professional Engineer and Land Surveyor.

Todd has over thirty years of experience in transportation grant programs, MPO activities and transit planning.  Before coming to WestCOG, Todd worked with the Massachusetts Department of Transportation (MassDOT) and at the Merrimack Valley and Central Massachusetts Regional Planning Commissions.  He holds a B.S. in Environmental Design from the University of Massachusetts at Amherst and a Masters’ in City Planning from Boston University.

Kristin supports the transportation planning staff on core projects, additionally she managing the regional traffic counting program and the Snow Removal Operations, Management and Routing study. She graduated from the University of Connecticut with a M.S. in Transportation and Urban Engineering and a B.S in Civil Engineering.  Prior to joining WestCOG, Kristin worked on projects relating to street design, street networks, signage, as well as a historical land use and transportation analysis. Kristin is passionate about helping make sustainable and livable communities in Connecticut.

Nicole supports the Planning staff on administrative, legislative, and transportation projects. Prior to joining WestCOG, Nicole worked at Joseph Merritt & Company in Danbury, Connecticut. Nicole graduated with a B.A. in Political Science from the University of Connecticut in Storrs and studied abroad in Ireland at University College Dublin.

Charles has over 40 years of experience in planning and government, including as the Principal Planner at the Council of Governments of the Central Naugatuck Valley, where he developed plans, regulations, and legislation related to regional and local planning. He has also served as Manager of Environmental Programs at the United States Postal Service Northeast Region, where he supervised the permitting, environmental review processes and government relations work for a $2 billion annual facilities program; at the national level he served in various capacities including as Incident Commander at the USPS’ Unified Incident Command Center, where he was responsible for anthrax response and coordinating Hurricane Katrina response efforts; as Manager for Corporate Sustainability Initiatives at USPS Headquarters, where he oversaw initiatives at 32,000 post offices nationwide; and as a visiting scientist at the Harvard School of Public Health where he conducted research and lectured on quarantine and the challenges of controlling communicable disease outbreaks. Charles has received numerous honors and distinctions, including awards from Presidents Clinton and George W. Bush and Vice President Gore.

Paula is a recreational trail advocate and planner with over 30 years of experience. Has served as Director of the Appalachian Mountain Club, Founding Member and current President of the Housatonic Valley Chapter of the New England Mountain Bike Association, downhill and cross-country bicycle instructor and guide, camp director, as well as 34 years as a high school teacher in Seymour. Paula will work on planning and development of recreational trail systems.

Mike oversees WestCOG staff matters and the Analytics Department. Mike has an interest in modernizing municipal processes to improve service and public access to data. He received a B.S. in Environmental Science from the University of Massachusetts, Lowell and a M.S. in Geography from Clark University.

Nicholas supports the planning staff with environmental management and transportation projects. Prior to joining WestCOG, he assisted the GIS staff at Joshua’s Tract Conservation and Historic Trust with their trail mapping project. He graduated with a B.S. in Geography from the University of Connecticut.

Tucker provides GIS support, with initial projects focused on stormwater and COVID Long Term Recovery. Prior to joining WestCOG, he worked as a municipal planner for the town of Wellesley, MA. He recently completed an MS in GIS for Development & the Environment at Clark University and received BS and BA degrees from the University of Rhode Island, in Marine Affairs and Anthropology, respectively.

Report on Truck Freight Movements during the COVID-19 Pandemic